GNSS RTK Use Cases and Applications

This article highlights the most common modes and example use cases using GNSS RTK technology provided by Swift Navigation.

Typical Modes of Operation for a GNSS RTK Receiver:

Let us take a look in detail on each of these modes of operation together with a real life application use case. 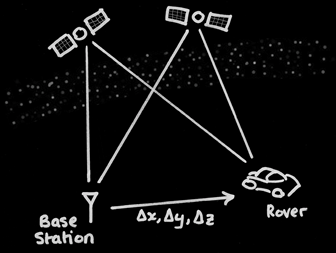 RTK requires two independent GPS / GNSS receiver modules to be linked with a robust communication link so that the primary (Base Station) unit can send RTK corrections to the secondary (Rover) unit. The rover receives these RTK corrections and solves for a ‘vector’ ΔX, ΔY ,ΔZ that is accurate to within 1-2 centimeters with reference to the base station unit. If one has accurately surveyed and entered the base station coordinates then the rover shall use these base station coordinates to solve for it’s position in the global reference frame.

The major difference in this mode of RTK is the fact that the base station is now not stationary in the global coordinate frame and is moving relative to the rover receiver. The most common application for this mode of RTK is in heading or orientation determination for a moving platform. Let us take an example of a boat for which one needs to find out the boat’s yaw or heading with reference to True North. A moving base GNSS receiver and a rover RTK receiver can be mounted on the platform (boat) in a manner such that the relative distance (baseline distance) between the base station and rover will always be fixed on a given length.

However, in the global frame of reference, the base station is actually moving and not statically fixed. This mode of operation is called Moving Baseline RTK where both the base station and rover GNSS receivers are moving in space but fixed with reference to each other. This moving vector always creates an angle with respect to True North and is the heading of the platform as shown below. 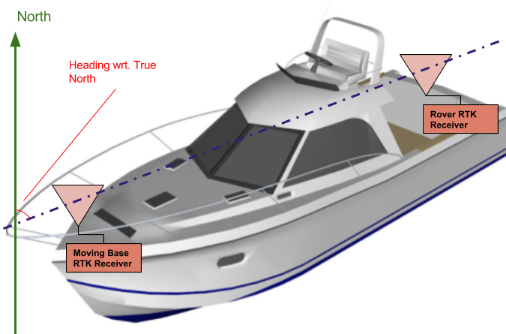 Typical use cases for an RTK receiver outputting raw GPS / GNSS data include some of the following:

The use of a higher precision code + carrier phase GNSS receivers for standard (non-differential) positioning typically is the result of better (robust) positioning in difficult environments. While low cost (<$10) GNSS C/A code only modules (such as the ones used in cellphones) and higher precision receivers give roughly the same position accuracy when used in a very good open sky environment, the real difference starts to show once the receivers are compared in a difficult environment (around foliage, buildings, etc.) with high multipath. In these use cases, a code+carrier phase precise GNSS receiver fares much better and is less prone to GPS error sources such as multipath.

Use of Raw GNSS Data in Post-Processed Kinematic (PPK) Mode