This article details the current heading feature available on Piksi® Multi and Duro as of firmware release v1.3. First, the document describes how to set up the Piksi Multi evaluation kit in order to produce heading. Secondly, the document describes how heading can be configured in the general sense. These features can be used to compute the heading and/or attitude of a rigid body or to augment other attitude sensors in navigation, control, and attitude/heading reference systems.

Note: while the Attitude unit provides the heading, the Reference unit can still provide a precise RTK position using stationary base station.

For the heading use case with the Piksi Multi evaluation kit, the following system diagram is the recommended configuration. Two Piksi and two antennas should be placed on a moving vehicle.  A crossover serial cable should be placed between the RS-232 0 ports between the two evaluation boards.  One Piksi (the left Piksi) operates only to provide GNSS Observations to the other Piksi that computes an RTK derived heading (right Piksi).  For the purposes of this article, we will call the Piksi that operates to provide the raw GNSS observations only the “Reference Receiver” and the Piksi producing heading measurements the “Attitude Receiver.” 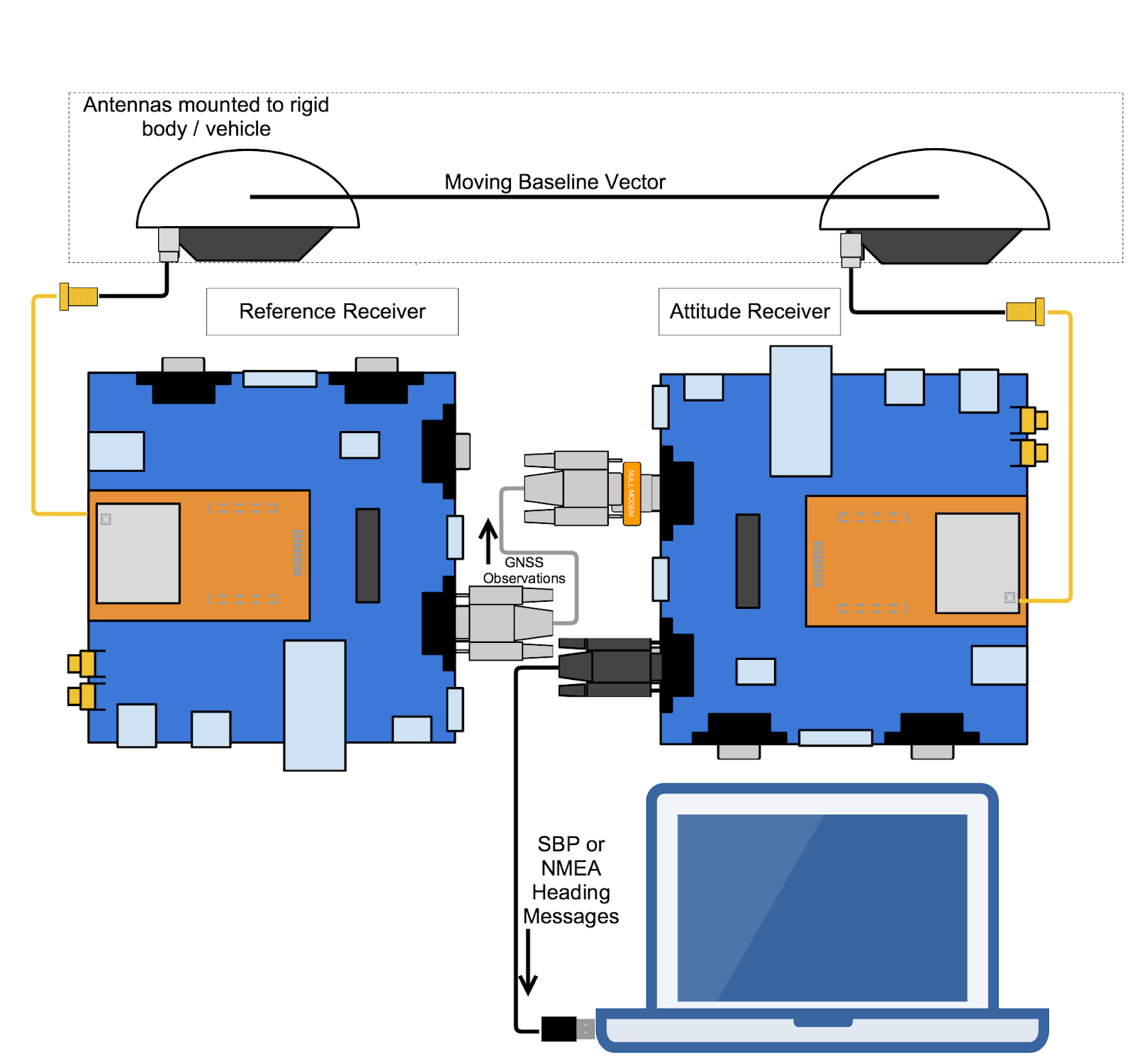 Piksi Multi software must be configured to enable heading output.  First, it must be configured to compute its differential solution in what is called “Time-matched mode”.  By default, Piksi operates in “low-latency” mode in which there is an inherent assumption that the base station is stationary. In the time-matched mode, each differential GNSS solution epoch is triggered by receipt of the raw observations from a moving secondary receiver. This means that the Piksi differential pair must have equal observation rates which are configured through the “solution rate” and the “output every n obs” settings.  It also means that there can be additional latency on the navigation output from any communication delay.  As such, we recommend using a direct serial cable rather than a radio to provide corrections. Please refer to tables 1 and 2 below to indicate the required settings.

These settings are to be configured on the Reference Receiver only providing observations to the attitude receiver. The Reference Receiver can still do RTK with corrections from either a stationary base station or an NTRIP client. Refer to RTCM Input and NTRIP Client articles for more information regarding NTRIP input.

These settings are to be configured on only the Attitude Receiver computing the RTK heading.

Heading output will be sent provided the “output_heading” setting is True and the Piksi is in RTK Fixed mode.  The heading produced is intended to be the vehicle heading and includes the heading_offset.  The heading output is produced by the Attitude receiver in the differential pair.

For interfaces that are configured in SBP mode, the heading output can take the form of the Swift Binary Protocol (SBP) MSG_BASELINE_HEADING message which is a message id of 0x020F in hexadecimal or 527 in decimal format.  This message’s content is detailed below in an excerpt from the Swift binary protocol document; please refer to the SBP support portal page for more information about SBP and the baseline heading message.

If an interface is configured in NMEA mode, the heading output is the NMEA HDT message. The HDT message consists of a single field representing the true heading in degrees that should take the form: “ $GPHDT,x.x,T*hh<CR><LF>”

To enable the feature, three things are required:

Note that using this method, the latency in the heading information is now tied to the latency you have in the communication between the Reference and the Attitude receivers. 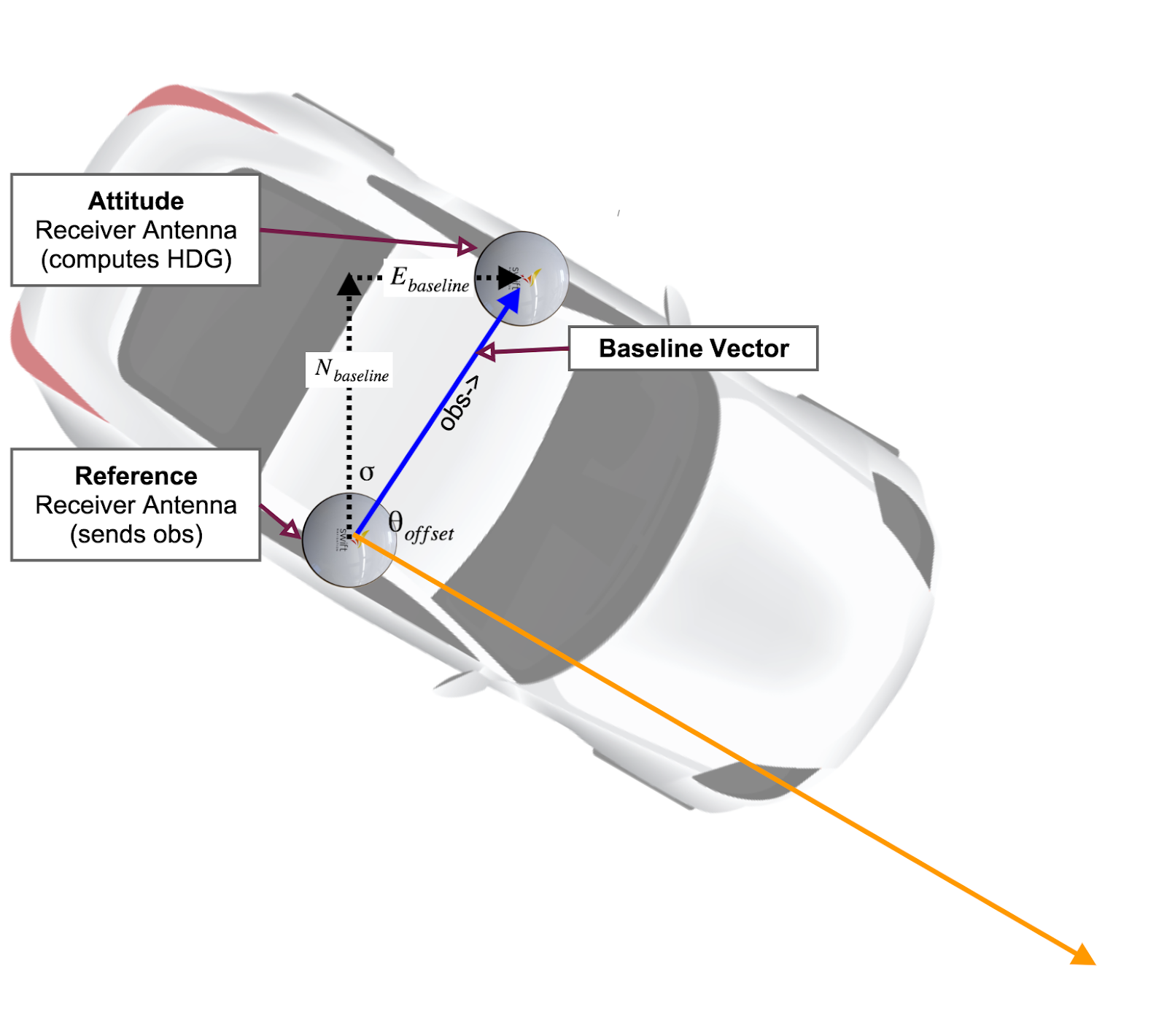 Figure 3: Visual depiction of the relationship between the baseline vector components, the two heading antennas, the Heading output (HDG) and the heading_offset setting